skip to main | skip to sidebar

Not many new posts...

And they're probably aren't going to be any for the next few weeks, either. Tomorrow I am heading off on my hols to Cornwall. I must admit I am rather excited, having never visited that neck of the woods before (even though I was actually born in Falmouth but was, erm, far too young to remember). We're staying in Newquay, which I've heard lots of good things about, not to mention Cornwall itself - we're planning on visiting lots of other places in the county too - St Ives, Tintagel, etc. The gay scene there looks pretty non-existent but then, that's not the be-all and end-all is it?! After that I'm back home for a few days but have scarcely time to rest before setting off on another trip, this time to visit folks/friends up North - and I'm going to be journeying from place to place - a Yorkshire/Lancashire/Leicestershire road trip no less: my family in York; a mate in Newcastle; a place in the Pennines called Haltwhistle; then Morecambe, Lancs, where one of my oldest friends resides (looks gloriously tacky but don't tell him that...) and finally Loughborough near Leicester. Should be good!

Not been many "cheesy" posts of late, I know, and still nothing on the last series of Dr Who!! You want the truth? I can't be bothered to watch all the episodes from Season Six again, in order to write some reviews! What has happened to me?! When I started my original blog, one of my main aims was to write a lot of posts on Dr Who-related things but over time my interest has really waned...am I turning into a boring old fart? Nah. I just wasn't that crazy about the latest series, that's all (and I agree with what you said, Amanda! And Tim, yes, perhaps I should dust out some old series DVDs and write about those instead!)

Anyways, enough of that. Have a fab Summer whatever you're doing everyone and I will be back...

The heart is a very resilient muscle

I realise I haven't blogged for f*ck knows how long...

But I'm still here!! And not intending on going away! Just bear with these hiatuses...

As the Summer hols are up and coming, perhaps I'll be able to manage more frequent posts...one hopes.

There are a few fairly valid reasons for my absence, though.

1. I did my usual stint of Summer exam marking, which is always time-consuming (but good for the coffers).

2. A few weeks ago, I went into hospital with a heart condition. It started off with a virus, swollen glands and then chest pains which wouldn't go away and which I'd never experienced before. After a few days, I thought "f*ck this" and took myself off to my local A&E. I was told I may have had a mini heart attack! After having an inordinate number of needles shoved into my arm, blood pressure taken etc, they shipped me off to another hospital with a good cardio dept, and kept me in for a few days whilst they conducted more tests etc...it transpired I had a condition called Myocarditis, which is an inflammation of the heart muscle that had stopped my ticker from working as efficiently as it should have been and consequently lead to the pain I'd been experiencing. Not blocked arteries or cholestrol, I'm pleased to add, as they shoved a stem into one of my arteries and then sent this dye up there so they could take a look and everything proved okay...thankfully. I've never been a massively unhealthy person, so that kind of figured.

Anyway after a few days of antibiotics and being checked up on I was discharged and sent home, but ordered to rest before going back to work. (I've got to say I take back all my previous gripes about the NHS. Apart from the school dinner-like food, which was, admittedly, cr*p, the attention and care I received was great. It's also a massive cliche, but you really do start reflecting on your own mortality when you're somewhere like that. For a couple of days I stayed in a ward with a lot of men who were much older and physically weaker than me, some awaiting triple by-passes and other more serious operations...one dear old guy in the bed across from me looked at death's door, but was so nice and kind to me even though we'd barely met/spoken: "Hello Simon, it's so nice to see a friendly face; so nice". I wanted to cry. I'm very, very lucky.)

But I'm alive! Hoorah! And will be back!!

(And I can't be a*sed to write about the latest series of Dr Who. I just felt so disappointed with the whole thing! Doh!)

Went to a rather good science fiction exhibition at the British Library with my Dad last Bank Holiday weekend. We both really enjoyed it. I'd urge you to do the same if you're in the vicinity of Kings Cross/St Pancras, or even just contemplating a London visit. It's free and there's lots of literary works by sci-fi authors on display plus various exhibits etc...for instance, you can draw your own alien and listen to clips of Marvin the Paranoid android * and HG Wells.

Talking of sci-fi you'll have no doubt observed that I have written/posted precisely nothing re: the brand new series of Doctor Who. I'm behind again, yes, I know. Work busyness and all has precluded it...story of my life. Anyway once this Saturday's final-cliffhanging-episode-until-the-show-comes-back-in-the-Autumn is over, I shall endeavour to write something. What I can admit to already though is an overarching feeling of disappointment with the series so far. The fact is, I'm becoming more and more hard to please, but the quality of the stories seems to be declining. Or is just my old age? (I actually whacked on my DVD of "The Hand of Fear" recently, partly to commemorate Lis Sladen's passing but it also to fulfil my yearning for old style "Who"...and I preferred it!) However I do have fairly high hopes about tomorrow's episode - apparently there's a mega-revelation in store regarding River Song's identity and we also get to find out about Amy's "baby". And the Cybermen are back. And the Silurians. And the "eye-patch" lady, aka Francis Barber, gets a starring role. Mmmm not too much to fit into one episode is it? Let's pray those hopes aren't dashed to dust...

Meanwhile to keep you going through the hiatus, I present you with this gem from .... Sir Clifford of Richard....yes his ode to Sci-fi...listen to the lyrics, they're actually rather witty/good! ** Just forgive the fact that the video seems to bear absolutely no relation to the song, but then it was the only clip on You Tube I could find....

Trust y'all are doing well....


* First prize to the first blogger who can explain who he is.
** Well, in my befuddled mind, any road.
Posted by Old Cheeser at 10:11 6 comments:

Well I couldn't resist tuning into Eurovision tonight to take in all the wondrous acts from all over Europe...except "wondrous" wasn't really the operative word. A right bunch of old tat and some seriously weird acts up there...examples included a bizarre jazz number with a singer who had an incredibly caterwauling voice, then a band from Moldova wearing pointy witchy type hats and some crazy bird on a unicycle, with an oompah brass section...weeeeeird. The winners, Azerbaijan, were no great shakes ...not a terrible song, but there were some worthier acts who deserved to claim the "Eurovision" crown such as Austria.

As for our lot, boyband Blue...well the song wasn't terrible either but obviously the judges thought otherwise. Irish act Jedward were their usual typically tacky selves, an act who send themselves up so much they didn't stand any serious chance of winning. As usual it's all tactical voting with neigbouring countries giving one another loads of points, as opposed to "nil points"...

I once blogged about Eurovision, and here too but the less than brilliant acts on show tonight have just inspired me to do some more Cheeser-ish harking back to the good old days of Euro-pop (okay not all of these are strictly Eurovision acts but who cares...)

Ladies and gents, I give you...

However, I demand that you CALL ME...

You could have taken one step further and I would have been there...

And is it true that you were only playing Love Games....?

But perhaps I'm just your Jack in a Box...

Will you parlez vous francais?

And last but not least...

In case you hadn't guessed, the title of this post pretty much sums up my opinion of the Royal Nuptials occurring tomorrow. Apologies to all royalists and William and Kate lovers - I suppose. We just can't get away from it though, can we?

Maybe it's my age. Maybe I'm getting cynical. Maybe I don't like the fact that our taxes are paying for the extraordinarily expensive extravagance that is the Royal Wedding.

I am however very pleased to be having the day off work tomorrow. There's been an awful lot of Bank Holidays recently, hence lots of time off from one's job. A four day weekend now beckons. Yaaaay! Not bad atall.

When I was a nipper I distinctly remember getting all in a tizzy about Charles and Diana getting spliced. I had a Charles and Di mug, a Charles and Di wedding brochure, even a Charles and Di plastic bag if memory serves me correctly. But it was 1981 and I was a mere 12 years old...things have changed somewhat. I'm really not bovvered, as Lauren might say...(I am also rather surprised to see that none of my fellow bloggers have commented on the forthcoming wedding! Can it be that none of you are "bothered" either??)

Don't get me wrong. I can appreciate the "fairy tale" element and I'm sure Kate Middleton will look ravishing. William isn't too bad himself, come to that - well, more than certain other gawky and geeky looking male members of the Royal Family. He's turned out quite a handsome fella...And on that particular note, I thought it might be nice to present y'all with a completely gratuitous picture of the aforementioned Prince in a pair of speedos (to hell with Kate Middleton, she's not important.) Good bod, eh? I do wonder what the ball is covering up, though... 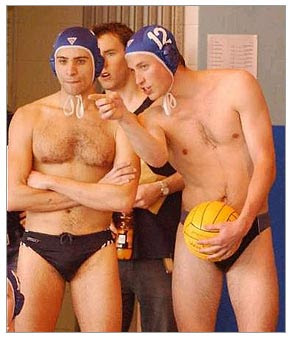 A friend has just alerted me to this story. Read it and grimace. One might have hoped that we'd moved on in these enlightened times. Granted, doing this in some pub in the ghettos of Hackney or some other equally rough and homophobic pocket of the UK might not have been such a good idea, but Soho....?!

Oddly enough I am probably heading there tonight and am tempted to go and join in the kissathon!! Wooohooo!! Power to the Homos!!!
Posted by Old Cheeser at 08:47 5 comments:

Let me hear your body talk

I am now the proud owner of a new exercise bike. And I started my regime today. I burnt over 400 calories. A good start...

I'm not quite sure if I will end up looking as trim and slim as the fine (if somewhat plastic) specimen of manhood below, but one must have something to aspire towards... 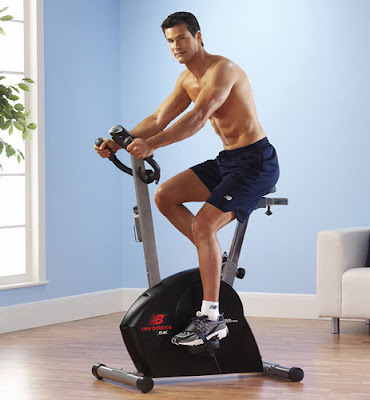 Old Cheeser
I'm a 47 year old Pisces man, but still very much a big kid at heart. I packed in this blogging malarkey once but now I'm back for more - in the words of Banararama, I Can't Help It. Music, movies and tv (usually of the cheesey and retro variety, but not always) are some of my biggest passions and coincidentally, I love to write about these things too, amongst other things. Occasionally I write about real life, but that's another story. So ... thanks for stopping by and hope you ENJOY!!